If you would like to be included on the project's email list to receive updates on public engagement opportunities, project schedule/milestones, and more please Click Here to enter!

A site walk with Town Staff and Project Partners is scheduled for Saturday December 3, 2022 at 10:00AM. Along with questions and comments please bring snacks, water and even your pets! We will meet at the site entry located at 62 Willow Street, Reading, MA.

A remote public forum is scheduled for Tuesday January 24, 2023 from 7:00 PM - 8:00 PM. A project summary, benefits and schedule/next step will be discussed. Public attendance and comment is encouraged. The forum will be accessed through the Zoom Meeting information below.

The Maillet, Sommes & Morgan Constructed Stormwater Wetland System is the result of a regional watershed wide effort to reduce flooding in the downstream communities by creating offline storage and treatment areas upstream within the Mystic River Watershed. The Mystic River Watershed totals 76 square miles of land that drains towards the Mystic River. Its headwaters begin in Reading, MA with the Aberjona River (which runs through the Maillet, Sommes & Morgan land) and flows through a number of municipalities before draining into Boston Harbor. With 21 municipalities and more than 600,000 peoples within the watershed area it is a vital resource to the state of Massachusetts and is the most densely populated watershed in the state. As with many others across the state this resource is vulnerable to climate change impacts including flooding, extreme rainfall and/or drought, and urban heat island effects. Climate change driven extreme rainfall is already causing smaller tributaries such as the Aberjona River to overtop their banks, leading to local and downstream flooding of residential areas. 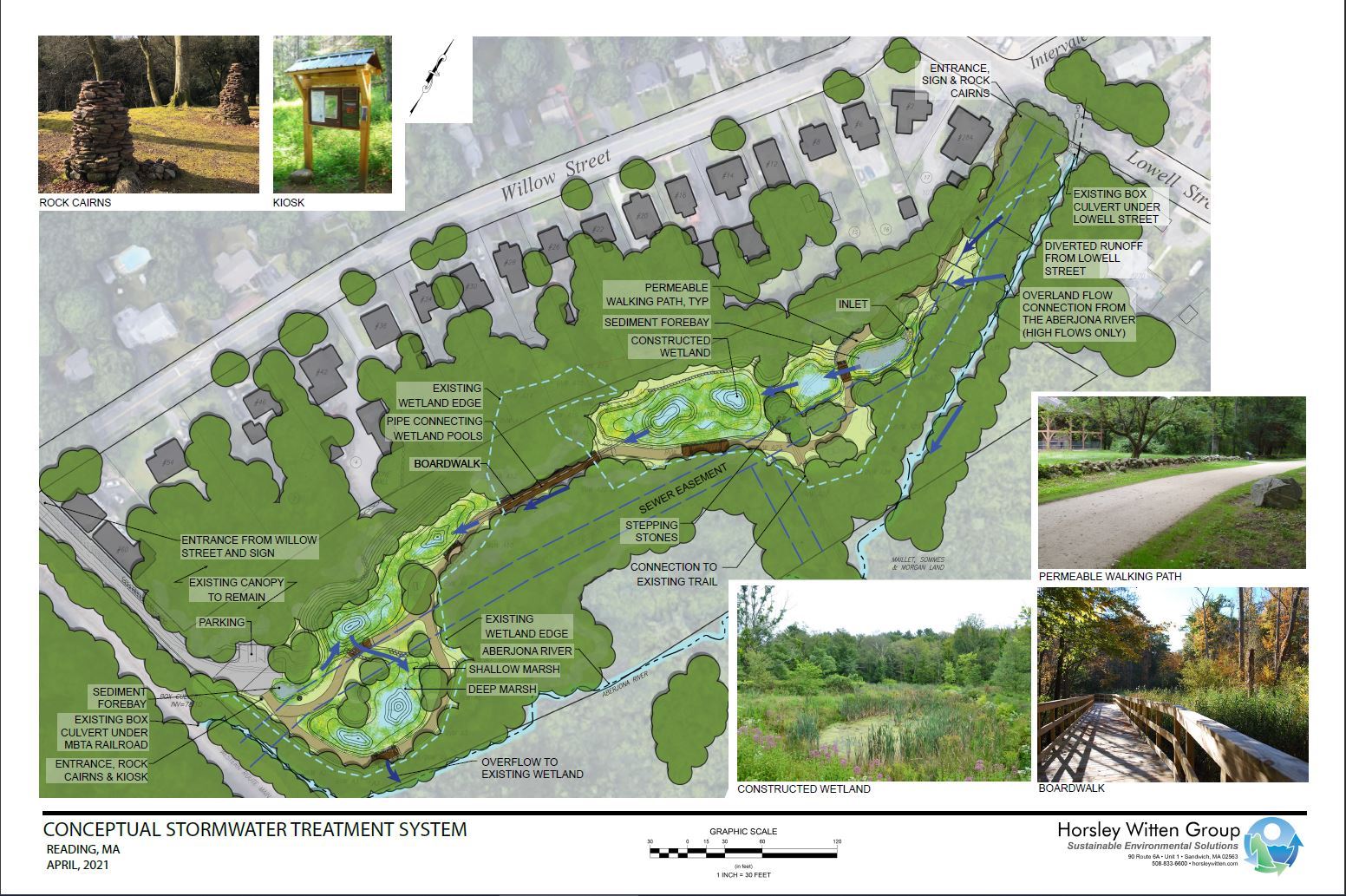 The project proposes to capture and attenuate stormwater impacting the Aberjona River by creating adjacent offline storage areas. The overall objective is to reduce climate related in-land flooding upstream by increasing stormwater storage capacity through the construction of a series of stormwater wetlands that will also provide co-benefits of: stormwater treatment/water quality; improved ecological and stream stability; invasive species removal; and, additional open space and trail development (including ADA access).

Stormwater would be diverted from the local roadways and existing culverts, as well as overland from the River, during high flow events. The wetland system would be designed to maintain a consistent water level by utilizing overflows and set elevations with an eventual discharge back into the Aberjona River.

Climate change is linked to heavier and more frequent rainfall, leading to more destructive in-land flooding. Reading’s MVP Report (2020) indicated that the Town currently experiences 1-2 days of intense rainfall (greater than 2”) per year, although recent years have shown this estimate to be conservative. An 8% increase is projected by mid-century and a 13% increase in extreme precipitation events is projected by 2100. 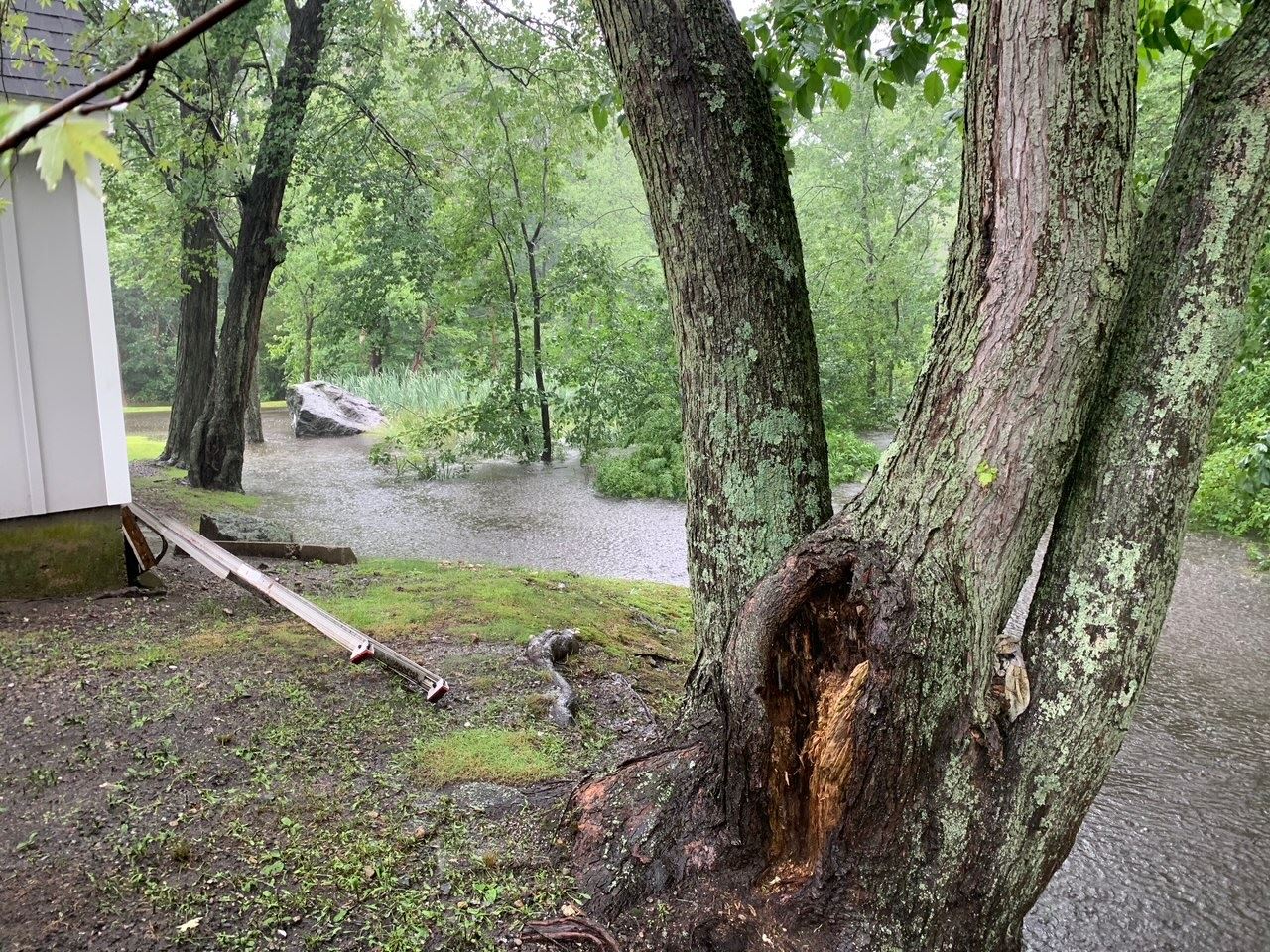 Upland and/or constructed wetlands have shown to have a positive and valuable impact on flood protection. As impervious areas increase the rate and volume of runoff the risk of flood damage also increases. When rain storms and snow melt occur, volume is increased and flooding may result. Wetlands, and especially those in floodplains (which near the Maillet, Sommes & Morgan land), have the capacity to store flood water during high runoff events. By slowing the rate at which flood water is released downstream climate induced flooding and erosion can be mitigated.

The plan design utilizes the most up to date and recent climate data As part of the MVP Grant application (see more info on the grant program below) a Resilient MA Action Team (RMAT) Climate Resilience Design Tool Report was developed. You may access the findings of the RMAT Tool Report here. To learn more about RMAT and Resilient MA please visit their site here.

Additional Co-Benefits of the Project

Community co-benefits of the project are numerous as it improves: ecological stability through invasive species removal and native plant replacement; stream bank stabilization; water quality; accessibility through the creation of ADA accessible entries and paths; public access and parking by improving an area previously inaccessible/hard to access; and, open space and recreation development through the creation/improvement of its path/trail network, which in turn can lead to improved public and social health of community members.

The remaining project timeline would see completion of the project by June 30, 2024.

The Plan Design is currently at 75% Completion and the 100% Construction Ready design is expected to be completed before January 2023. Upon completion of the plan set the project will be released for bid between January and February 2023. Construction is expected to ensue in March 2023. Site grading, earthworks and utility install are proposed to be completed by July 1, 2023 (FY24). FY24 will see the construction of the wetland system, paving and curbing, trail development and the installation of site elements and landscaping. While elements may be subject to future change the proposed schedule is as follows:

The Town of Reading was designated an MVP Community in 2020 upon completion of the Community Resilience Building (CRB) public process. Three online workshops were held to discuss Reading's strengths and weakness to expected climate impacts across it's Infrastructure, Environment and Social Health. The CRB process delivered Reading's Final MVP Report, which you can access here. Priorities and recommendations across all three sectors were set.

MVP is a state grant program provides support for municipalities to plan for climate resilience and the implementation of identified priority projects. To learn more about the MVP Program please visit the Resilient MA webpage here.

The project is the result of a regional wide partnership with the Mystic River Watershed Association (MyRWA), Resilient Mystic Collaborative (RMC), and the communities within such. The group(s) established a previously stated goal to “develop a multi-year, multi-community master plan of stormwater wetland projects that helps manage regional flooding while providing co-benefits to host communities”. A total of 465 locations were reviewed to determine the feasibility and success of creating stormwater storage. The Maillet, Sommes & Morgan land in Reading was determined to be a top three project location (along with land within the Town of Lexington and the City of Woburn) for increased flood storage and stormwater treatment through constructed wetland systems that employ nature-based solutions and green infrastructure components. In FY21 the Town of Lexington submitted an MVP Action Grant Application for initial permitting analysis and plan design for the regional projects. The application included the request for funding to develop 75% design plans for constructed wetlands at the Reading site, as well as to develop and submit permitting requirements for the project. The grant request was awarded and initiated a further public engagement process for the plan design.

The project was awarded $75,000 from the Reading ARPA Committee and Select Board to fund the project's 100% plan design, surveying and public engagement (Scope of Work/Estimate above).