This meeting will be held at the Tin Bucket establishment located at 12 Woburn Street, Reading, MA.

A remote forum was conducted on Wednesday October 12th, 2022. You may watch a recording of the presentation here.

This meeting was held at the Reading Public Library (64 Middlesex Avenue) Community Room A.

Board of Health Presentation 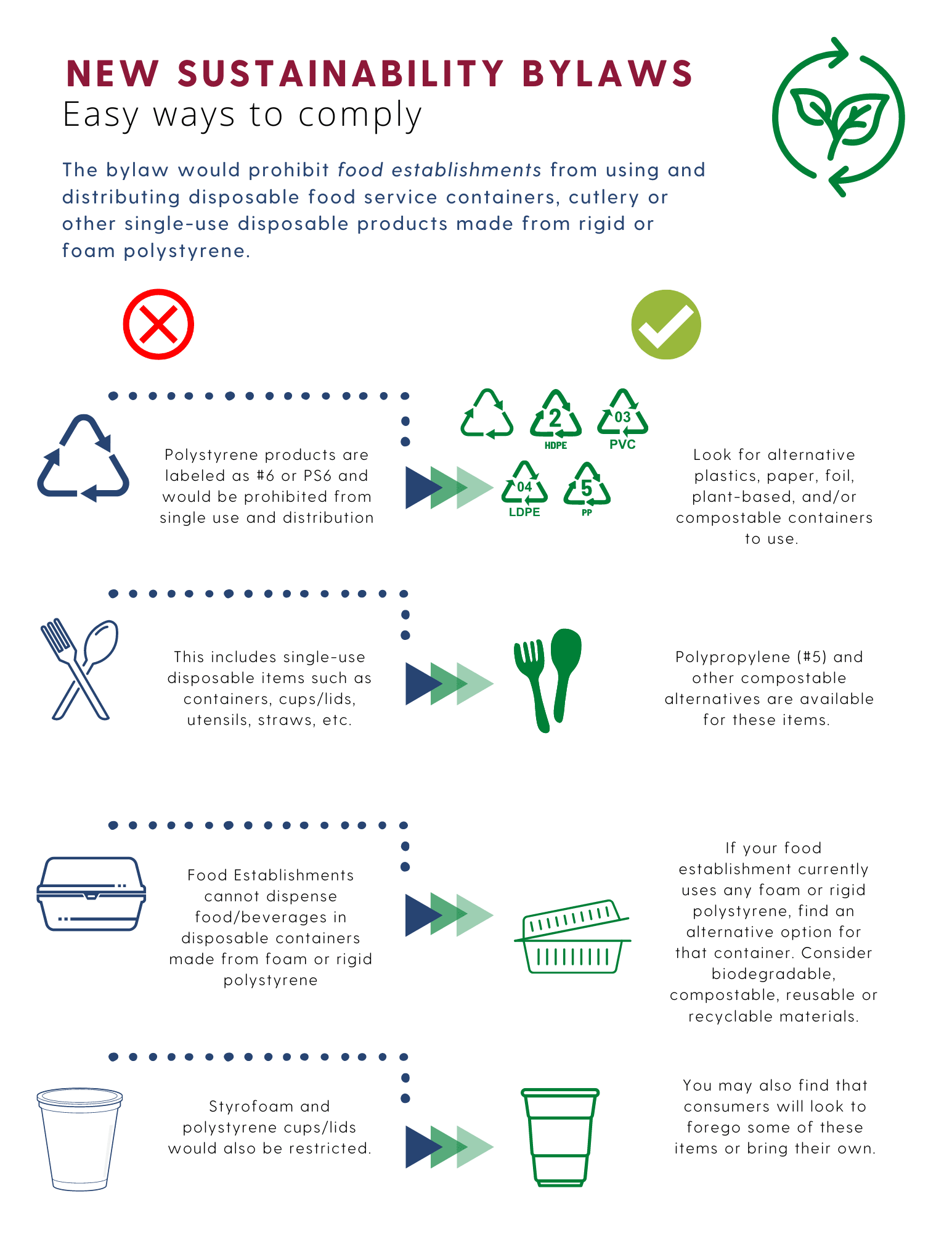 It is typically plastics labeled with the #6 or PS6.

What is the proposal and why?

The adoption of Bylaw Section 8.14 would prohibit food establishments from using or distributing disposable food service containers, cutlery or other single-use disposable products made from rigid or foam polystyrene.

While also being a probably carcinogen polystyrene items are almost never recycled due to its low value. The bulky foam form is not accepted in curbside recycling programs and the rigid form is not recycled even when collected curbside.

Polystyrene items harm wildlife and are not biodegradable. It fragments through mechanical action and degrades in the presence of light; a process that takes approximately 200 years to complete. The foam form, in particular, is often mistaken as food by both domestic and wild animals.

When would the regulations go into effect and who would they apply to?

If approved, the Bylaw would go into effect 6-months after it is posited by the Town Clerk. The Bylaw is proposed for discussion at Subsequent Town Meeting in November 2022 (scheduled Town Meeting dates include 11/14, 11/17, 11/21, 11/28). If adopted it would likely go into effect in Summer of 2023.

This bylaw applies to food establishments which includes restaurants, mobile food vendors, caterers, public and private schools, farmers markets, civic or religious centers or facilities, any building owned by the Town of Reading, and any establishment requiring a permit to operate in accordance with the State Food Code.

The Public Health Director, or their designee, shall have the authority to administer and enforce this bylaw.

In the event of a noticed violation, the following would be enforced: First Offense = written warning, second offense = $50 penalty, third offense = $200 penalty.

Food establishments shall have 15 calendar days after the date that a notice of a violation is issued to pay the penalty or request a hearing with the Director. No more than 1 penalty shall be imposed on an establishment within a 15 calendar day period.

In the event that compliance is not feasible for an establishment because of unavailability of alternatives or economic hardship the Director may grant a waiver of not more than 6 months upon applications of the establishment. The Director may provide an additional 6 month waiver upon showing of continued infeasibility or hardship.

I receive products already packaged in Polystyrene, can I continue to resell them?

The following are exempt and not subject to the provisions of this bylaw:

Pre-packaged meat and produce trays, egg cartons and other food/beverage products bought from or packaged by a supplier other than the local establishment.

What are the alternatives to Polystyrene containers?

Will this bylaw cost my business more money?

Although some sustainable products may initially be higher priced than polystyrene businesses will also find that they need to purchase fewer utensils, stirrers, straws, etc. as customers forego these items or supply their own.